Save Kids' Lives with #MarvelStudios #HeroActs 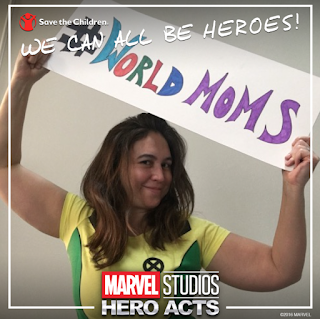 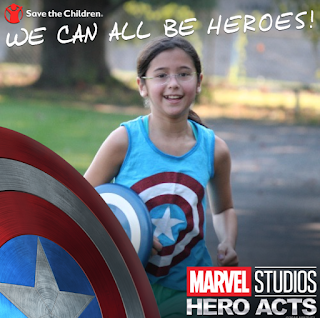 From now until the end of February you can be a hero to kids around the world AND enter a contest to win a trip to the movie premiere of "Guardians of the Galaxy Vol. 2"  All you have to do is upload a picture of yourself to MarvelStudiosHeroActs.com to win a chance for you and a friend (ME, presumably because I told you about this thing in the first place, yes?) to walk the red carpet at the Guardians of the Galaxy Vol. 2 world premiere. For every post, Marvel Studio will donate $5 (up to $1 million!!) to one of my favorite charities, Save the Children. Save the Children provides learning materials and relief to kids in need around the world.

Finally! A chance for me to put some of our costume race photos to good use! I mean if you bother to make your family wear these costumes in public once for a fundraiser to save lives with RESULTS, we can get a little more milage out of them again. Just sayin'. 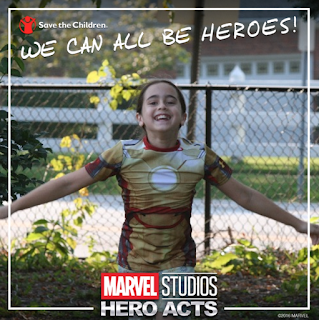 But wait, there's more! Just for this week, they are donating $15 for every photo. PLUS, they will donate an extra $15 if you post to Facebook or Twitter. So, don't procrastinate on this one. And if you win...well, just remember who sent you there, okay?

Would you prefer to hear all that same information said by the very handsome and articulate Chris Pratt on a video instead of typed by me? Yeah, me too... Here you go!

Note: I am no way compensated by Marvel Studios or Save the Children. I'm just fond of them both. Also, Chris Pratt. I'm fond of him as well.

Look to the Lorax

"Unless someone cares a whole awful lot


Nothing is going to get better, it's not"

The Lorax was not my favorite Dr. Seuss book as a kid and it wasn't a favorite for either of my daughters when they were small. We were all more Green Eggs and Ham girls. I was way more into that aggravating Sam-I-Am than the stubby environmentalist shouting into the wind. The Lorax is one of those children's books that is written just as much for adults than for kids. Couched within whimsical drawings of imaginary creations like barbaloots and truffula trees is a post-apocolyptic tale meant to shock us into action. First published the year I was born (1971), it's a story about the dangers of personal and corporate greed towards nature. Perhaps even as a child, I sensed there was something different about this book. That it was pointing out some "inconvenient truth" long before Al Gore would ever come along with his big projection screen. Yet as my girls and I lean in to activism and become more aware of how humanity's destructive nature hurts the environment and ourselves (those in poverty most), we've taken to emulating the Lorax every time we find a likely stump to stand on anywhere in the world. It's become a symbol of standing up against all odds for what is right. The Lorax is clever, but it's not happy. It's inspirational, but mostly because it manages to make you feel angry about injustice and responsible for solutions at the same time.
Indeed, the Theodore Geisel (a.k.a. Dr. Seuss) claims that the book came out of his own anger. "In The Lorax, I was out to attack what I think are evil things and let the chips fall where they might." The uncomfortable feelings of anger, frustration, and sadness are front and center in this story within a story. Those aren't really feelings we're used to being served up in books as children.

When the book opens, a boy in a desolate, polluted landscape gives an offering of odds-n-ends to hear the story of the lifted Lorax. In return, the Once-ler recounts the tale in which he himself is the villain. He relates how he came to a beautiful forest filled with incredible animals. He chose to use the unusual trees to manufacture "thneeds," garments which everyone wants, but nobody needs. Despite the protestations of the Lorax - who speaks for the trees and eventually all the woodland creatures - the Once-ler and his family create polluting factories and deplete the area of all the truffula trees. Only once everything is gone, spoiled, and utterly used up, do the Once-ler's family members leave and the Lorax stops fighting to lift himself away with only a sad, backward glance.

"The Lorax said nothing. Just gave me a glance...just gave me a very sad, sad backward glance and he lifted himself by the seat of his pants."


The Lorax leaves only a stump behind with the word "UNLESS" carved on it. The Once-ler himself is despondent and ruined in the current timeline, left only with the mystery of the stump, but suddenly realizes what the riddle means. "UNLESS someone cares a whole awful lot, nothing will is going to get better. It's not!" He gives the boy the last truffula seed, passing on the responsibility to the youngster to regrow a forest in hopes that the animals - and maybe even the Lorax himself - might return. And then...it just ends... We don't know what happens to The Lorax, The Once-ler, the boy, or a single barbaloot.

Perhaps the biggest reason that I didn't like the book as a child AND the reason that it may be the greatest Seuss book in the library, is the ending. It's sad. It's ambiguous. When we realize that WE are the boy, we know it's up to us to write the ending ourselves. It puts the responsibility to write end of the story in our own hands and we are uncomfortable with it. It's not exactly the children's book we want, but I think it's the children's book we need...generation after generation.

What do you think about The Lorax?

Is there another children's book you came to appreciate later in life for it's social messaging?