We Need to Be Much More "Muchier" 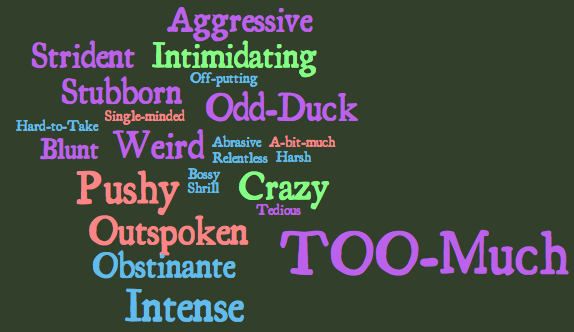 All those are words I've heard used to describe me and other anti-poverty advocates I know. Heck, I've actually used a few of them to describe some of my fellow activists myself. Pretty negative, huh? How would you feel if someone called you those things to your face or behind your back? If you speak up only to hear those words come back at you, most women - including me - tend to take a step back, shut our mouths, and lick our wounds wondering what we did wrong.

But what if the lives of your children were at stake? And speaking up aggressively was the only to save them? How about 10 children? How about 1.7 million children (the number of kids in developing nations who will die from a preventable disease this year)? With so much at stake, isn't it worth it to risk being "a bit much"?


I like that word "muchness." When I heard Johnny Depp's Mad Hatter use it, I thought it was an awesome way to describe that sense of being when you are comfortable in yourself and willing to take risks. Even if muchness isn't appreciated by everyone around you and might get your branded as weird or odd. My muchness was greatly diminished when I left my job and stayed home with my infant daughter. I was scared, vulnerable, and had somewhat lost my identity by leaving my career. Becoming an advocate and finding my voice to speak for those in poverty helped me become unapologetically bold as I strive to inspire others into action.


My good friend, Myrdin Thompson, had her natural muchness challenged early in her adulthood. In her #140You talk - click here to see it! - she described an instance when she was stretching her wings and was crushed to have another woman describe her as "tough to take."

What followed was years of tempering her temperament until she could go through her own personal transformation to get her groove back. I'm so glad she did. Because now she is a Shot@Life champion fighting for children around the world in need of vaccinations. She now thinks it's not such a curse to carry a such a label. She says, "Tough to take doesn't have to be a negative thing and can get you places that you wouldn't get you normally because you wouldn't take those chances."

The first time I met Myrdin was the very first Shot@Life Summit in Washington D.C. where the UN Foundation brought together about 40 champions - mostly women - handpicked for our muchness. They channeled our muchness with education and training to turn us into a team of powerful advocates for child survival. It was good to be unapologetically passionate about my poverty-fighting ways. At the end when a microphone was handed around so we could all share final thoughts, I said, "It's a relief to not be the crazy one in the room. You're all just as passionate and intense about this as I am and it's fantastic." Finding a room full of "muchy" friends united in a common cause has been highly empowering for me and helped me embrace some of the labels that go with it.

This is not to say that we have to be utterly unlikeable. After all, for certain occasions - especially fundraising - the old adage is true...you can catch more flies with honey than with vinegar! But most of us can afford to fight the natural instinct to slink into the corner and train ourselves to keep up the drumbeat to invite others to join our cause and take action. The problems of this world our too big to ignore and we should not let ourselves be ignored.

So, yeah. We can own those negative words if we need to. And we can soften our edges when we want to. But here are some words that should never used to describe us advocates: Apathetic. Ineffective. Indecisive. Wishy-washy. Unengaged. Half-assed. Lazy. Spineless.