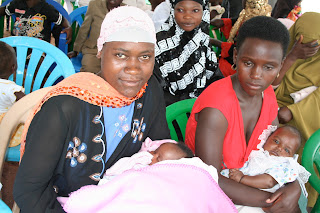 I hope some folks were moved by my previous post with Ugandan 1st graders urging us to vaccinate against polio and measles. I asked for folks to join Shot@Life, but if you'd like to do more today, please consider a simple action that can have such a big impact for families all around the world. Write to your U.S. representative!
Right now, Congress is busy deciding how much money the U.S. government will spend next year – including how much will be spent to provide life-saving immunizations to children in developing countries. Last year, Congress agreed to spend $350 million on global vaccines. That's only 0.01% of the entire U.S. federal budget and will helps save the lives of 2.5 million children every year. But don't think about 2.5 million faceless numbers. Think about real mothers and babies like the ones my friends and I met in Uganda. Here are some of their pictures along with my fellow traveling companions/Shot@Life champions, Jen Burden of World Moms Blog and Felisa Hilbert of RESULTS. These beautiful angels deserve a chance at loving cuddles and happy days like at the Eid celebration we attended with UNICEF to bring immunizations to a whole community.

Children and mothers need your help to email Congress and ask them to help save the lives of millions of children by fully funding U.S. global vaccination and immunization programs.
We must tell our elected officials we care about giving every child, no matter where they live, a shot at a healthy life. Your voice matters and you can help ensure that all children have access to the vaccines that they need simply by sending an email to your representative right now.
Please tell your member of Congress to support funding for global vaccines in the current budget discussions.
Thank you for taking action.
Posted by CCYL at 11:28 AM No comments: 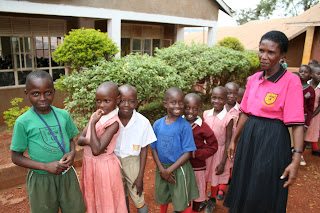 Who do you listen to for vaccination advice and expertise? Doctors? Friends? Jenny McCarthy? Personally, I tend toward the science, but today I offer another opinion for you to consider. A group of people with very loud voices that don't get heard by Americans very much: Ugandan children.

I had the honor of meeting some when I traveled to Uganda with the United Nations Foundation's Shot@Life campaign last October to learn about vaccine programs with UNICEF. These children are are young, they are small, but they know something about disease. They know that friends and family can die from measles. They know that polio makes people limp permanently...or worse. And that makes them wiser than us in a way. It's been just a few generations since polio and measles have been epidemics in our country, but that has been enough to erase the horrible effects from the collective consciousness of the wealthiest nations. Time and the miraculous preventative powers of vaccines have allowed us to forget. What a dangerous thing. Forgetting things like that start to lead us from away from scientists' and doctors' advice about how to avoid such horrors. But measles and polio are still in the minds of the children I met and their teachers. They should be on ours as well.

Since 1988, polio cases worldwide have been reduced by 99 percent. But it has recently reemerged in areas that had been polio-free for years. We are at the crossroads of being able to eradicate polio from our planet...or backsliding so that the progress of brave polio vaccine workers gradually erodes and lets the disease back into our world. Measles still kills an estimated 450 people each day worldwide- the majority of whom are young children.

So, please, click on the video and listen to their voices. Add theirs to the input of vaccine information you take in. If their message moves you, join Shot@Life to help spread the word that, together, we can save children's lives around the world.