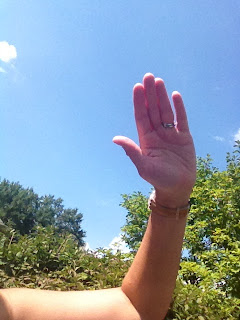 There, I've just given you a high five today. Whatever you're trying to do, consider yourself encouraged. Lots of times, we give high fives when something awesome happens like Neil Patrick  Harris does on How I Met Your Mother, but today I'm talking about the kind of high fives you give a runner on a marathon race course. I call that a Magic Five.

A Magic Five is one given when someone is doing something hard and running out of steam. That ineffable transfer of energy from one human to another. Maybe it's Chi? I don't know. But I do know that there is a palpable burst of energy and resolve that results from someone making a gesture to say "Way to go. You got this. I believe in you." It could be a fist bump like the Obama's, sure, but I'm clumsy and might end up clocking the very person I'm trying to encourage. However it's given, everybody needs them whether they are trying to set a personal best in running or advocating to change the world. 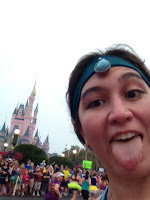 The best place to see Magic Fives are a long distance race course. I love lines of spectators lining 1/2 marathons to give high fives to others while waiting to see their own runner. The most magical of fives come from little kids and Disney characters, of course. I've run down a line of folks feeling like an emotional energy vampire as I gained strength from every one on a full marathon course in Walt Disney World. But I've given and received them on my everyday runs when I see a friend exercising in a park or even with fellow lobbyists on Capitol Hill on RESULTS' Lobby Day.

Actual physical contact isn't always needed either. Sometimes the virtual high five can be just as powerful. I have a Nike+ running app on my iphone linked to facebook, so that when my friends "like" my status saying I'm out for a run, it sends a burst of applause, cheers, and cowbells into my earbuds so I know I'm not alone. And my virtual club on Twitter - #Run3rd - is a real-time tapestry of inspiration and cheers for teammates.

How does this relate to advocacy? Well, advocacy is tough and lonely work. Not everybody understands it, so you might not have a ton of local support especially if you are new. At a new advocate training session, I once had a young man raise his hand to confess, "One time I had a meeting and the only person who showed up was me." What I could say to him is, "Yeah...that's happened to me, too." Advocating Congress to end poverty or any kind of world change is a marathon, not a sprint. It requires patience, endurance, and pacing. We lose a lot of potentially powerful activists because they were not supported or encouraged at the right time.

So, today I'm offering virtual Magic Fives. To my #Run3rd teammates out in Disneyland this week running the 1/2 marathon, to my co-workers enjoying a rare day off, to the novice advocates that have trouble finding colleagues to lobby with, and to the experienced activists who have been advocating for years and are feeling a tad burned out. Put your hand on the screen wherever you are in the U.S. or the world - you, too, Indiana! - in 3, 2, 1..!

Way to go. You got this. I believe in you.

Now go Magic Five someone else :)

First Day of School Celebration: More than a Meme 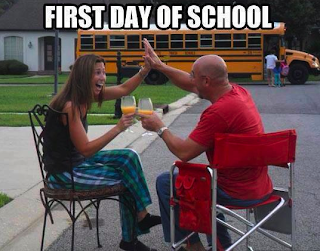 I've seen a lot of weepiness on facebook in the last few weeks from moms (none from dads...that's weird...) misty over their oldest or youngest kids going to school. But this picture sums up my feelings about it. When your kids get on the bus, literally or figuratively, that means you've kept them alive and healthy - unlike the 19,000 children who will die of treatable and preventable causes this year. It means that you got them access to education - unlike 61 million primary school aged kids this year. It means you've done a great job, Mom and Dad. That deserves a toast! Now, with the kids in school, we have a little more time to fight for those other kids who aren't as lucky as ours. I'll drink to that.

Don't misunderstand. There's nothing wrong with being nostalgic about your babies growing up. What's more, I totally get where this meme in the picture is supposed to be going. When we can, my husband and I actually schedule a day off of work for the first full day of school to have a mid-day date of shopping, lunching, and other extra-curricular activities. But for the other days of the school year, having kids in school means time to dedicate myself uninterrupted to my job with RESULTS working toward the end of poverty, helping other volunteers reach for lofty goals like Education for All. By "all," I mean "ALL." No child on the planet without access to quality teachers and a safe, enriching learning experience. No girls left behind to tend goats or infants while brothers go to school. 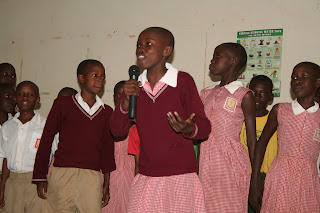 #1 Education leads to safety and national security: Education helps to fight poverty and spur economic growth. It is a prerequisite for short- and long- term economic growth and stability. After all, no country has achieved rapid economic growth without at least 40% of adults being able to read and write. Just one year of primary schooling adds about 10% to a person's future wage. So, getting kids educated leads to stable developing countries. Of the world's 20 poorest countries, 16 have suffered a major civil war in the last 20 years. Need to bring this back home on a local level? Consider that education offers an alternative to extremism. I heard Julia Bolz of Journey with an Afghan School tell a story about how boys that came to the first day of school with guns later returned with soccer balls in hand instead. That's an improvement that shows me how less extremism means fewer American soldiers stationed overseas and lives lost. That's local to me. 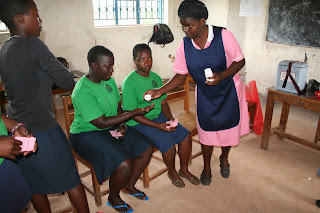 #2 Education of girls is like a "social vaccine": Girls are much less likely to be educated worldwide than boys, but the impact of educating a girl has huge impact on global health. Children of mothers with a primary education are 50% more likely to be immunized. The largest contributing factor to reducing child malnutrition has been the education of women - even more so than direct food aid! Plus, according to the World Bank, the risk of HIV/AIDS infection is more thank halved for young people, particularly girls, who stay in school and complete a basic education. 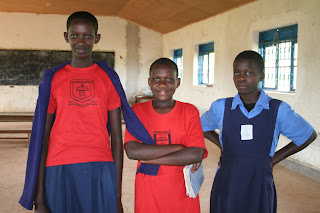 #3 Educated girls make educated moms who stand a chance of breaking the cycle of poverty: Women and girls make up nearly 70% of the poor worldwide. Women make up an increasing share of the workforce (40.5% globally in 2008), but in many regions, women are disproportionately employed in “vulnerable jobs” in agriculture and in the services sector as factory workers...not to mention those swept up into human trafficking. These jobs are often characterized by informal working arrangements that lack decent working conditions and adequate wages. But mostly, it comes down to this: when women control the family budget, they are more likely than men to invest in children’s health and well-being.

So, kick back and enjoy the quiet. Have your favorite beverage in a mug and pat yourself on the back on a job well done getting your children out of the house and into the school. And when you're done, take a quick action. Contact your U.S. representative and tell him or her to support the Education for All Act of 2013 (H.R. 2780). You can call or you can use this handy online tool from RESULTS. It will only take a minute, I promise. A minute you can now well afford! :)

P.S. Just for fun, here's last years' first day of school internet picture that went viral. I'm thinking it's the same mom. I'd love to credit her for her humor and creativity and share this blog with her, too, if anyone knows where I can find her. 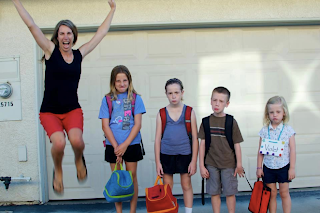