What Do You Do With the Mad That You Feel?: Mr. Rogers' Goes to Washington

"What do you do with the mad that you feel?" 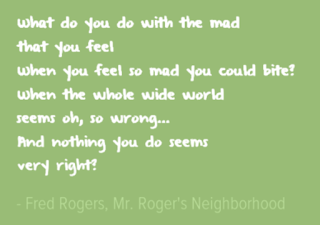 That was the name of a song from one of my favorite Children's Public Television shows called Mr. Roger's Neighborhood when I was a kid. Fred Rogers wrote it after a child asked him those very words. It was a song meant to help all us kids re-direct angry instincts to act out negatively and find constructive ways to channel our anger instead.

As a volunteer lobbyist, I'm often in the position of going into an office of a senator or representative to talk about policies and systems that make me really mad. Sometimes, it's something the member of Congress has said or done publicly that makes me angry and I have to figure out how to get in touch with that inner outrage, but channel it in a way that will lead to a positive outcome. At the same time, we everyday folks have to worry about those nagging insecure feelings of "What if I don't sound professional?" or "What if I can't think of the right words?"

Well, once upon a time back in 1969, there was was a day when Mister Rogers, beloved icon of children's television, showed everyone the very best way to lobby and take action with the mad that he felt. PBS and the Corporation for Public Broadcasting was then (as it is periodically even now) under attack for defunding. Fred Rogers spoke in a senate committee hearing to support public television in response to a steep 50% cut proposed by President Nixon. I assume assume that very few people saw his testimony since congressional hearings were hardly ever televised. But now, through the magic of YouTube, we can see what happened that day. 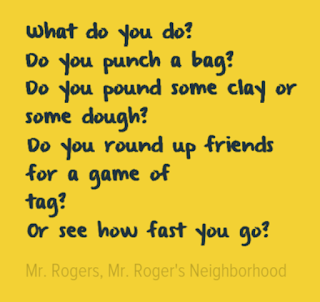 Like the very best volunteer lobbyists, Mr. Rogers took time away from his work and family to speak from the heart on an issue he felt strongly about. He wasn't slick or clever. He didn't use a lot of technical educational terms. He put aside formal remarks and he told a story. He took his time, speaking slowly and with care to a senator who was - in my opinion - being rather snarky and unfriendly to him. He spoke just the way he spoke to all of us toddlers every day when we sat around the TV waiting for him to feed his fish and change his shoes. (Incidentally, I think that is also a great testimony to the fact that he spoke to children with great respect and without being condescending...another lesson we parents should learn)

He said these words in a congressional hearing to let senators know that every single day he told us kids something to affirm our self-worth: "You made today a special day by just your being you. There is no person in the whole world like you. And I like you just the way you are." Words so powerful it made me cry just to hear them again in the video as a 43 year old mom. He melted the heart of that senator and earned the full $20 Million dollars for public television just like that.

Mr. Rogers passed away in 2003, but his legacy of a solid emotional foundation in millions of children is still evident in grown-ups like me. Thank you, Mr. Rogers. For teaching me this one last lesson.