Add Acts to your Thought and Prayers 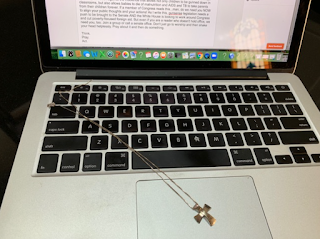 I used to have a lot of time to think when I had only one baby and no job. I used to pray a lot about the things that really worried or scared me the most. I still pray. I still think. But now I also act.

This morning, I read an op-ed from Dana Milbank of the Washington Post called "Republicans' thoughts and prayers have become cruel joke." He's talking about the roll call of empty tweets from lawmakers professing to care a lot about the victims of gun violence in the midst of their inaction. It's easy for me to also cast an accusing finger at members of Congress for their neglect and inaction. But instead, I'm going to extend an olive branch and say, "Hey...that was once me, too."

Look, I don't talk a lot about my faith on this particular blog. But today, I will. Because I think there are a lot of people - members of Congress and regular constituents alike - who need to hear this about the "Thoughts and Prayers" phrase that gets bandied about so casually.

I, too, was someone who looked to G-d to solve all kinds of problems that I thought were too big for me to handle. Famine. AIDS. Malaria. My awareness of children suffering in Haiti was keeping me up at night. I read newspapers and magazines about it. I learned and I thought. I prayed with my congregation and on my knees at night. But it took some special activists in my life to introduce me to advocacy and show me that it was G-d acting through humans that was making steady progress in ridding the world of such suffering. And things might go a heck of a lot faster if I would become one of those humans! One Lenten season, I decided that in addition to praying every day about children dying for 40 days, I would also take an action every day. It could be an email, a phone call, or submitting a letter to the editor, but I would speak out in some way every day for forty days. In that discipline, I began to see bits of progress that were so much more impactful than my years of empty prayers without adding the conviction of sacrificing some time, giving some energy, and maybe even risking some public reputation.

I'm no biblical scholar, but as an average, run-of-the-mill Christian, I favor the words of James who declared, "What does it profit, my brethren, if someone ways he has faith, but does not have works? Can faith save him? If a brother or sister is naked and destitute of daily food, and one of you says to them, "Depart in peace, be warmed and filled," but you do not give them the things which are needed for the body, what does it profit? Thus also faith by itself, it it does not have works, is dead." (NIV James 2:14-17) And here, I'll share that my personal understanding of this interprets "faith" to be "sincere thoughts and prayers" and "works" to be "personal acts to bring about change."

He didn't say to stop having faith. He was saying we need to have both. I'm not willing to say prayers are useless. Actions make prayers more full and robust. They bring intention into being. I believe they bring us closer to G-d as we act together in concert to bring about a better world. I think when we pray to do G-d's will and then do something about it, G-d blesses our actions and is the wind in our sails. Thoughts and prayers combined with actions can be immensely powerful. They can bolster our own strength and conviction and help us choose the wise and morally right actions. I mean, we don't want anyone acting without thinking, right?

So, I'm urging everyone to pair their thoughts and prayers with actions. Act in positive ways that will push back against the indolence that allows not only children to be gunned down in classrooms, but also allows babies to die of malnutrition and AIDS and TB to take parents from their children forever. If a member of Congress reads this...man, do we need you NOW to align your public thoughts and your actions! As I write this, gunsense legislation needs a push to be brought to the Senate AND the White House is looking to work around Congress and cut poverty-focused foreign aid. But even if you are a reader who doesn't hold office, we need you, too. Join a group or call a senate office. Don't just go to worship and then shake your head helplessly. Pray about it and then do something.

Media Tips: What Will Be Our Next Moonshot? 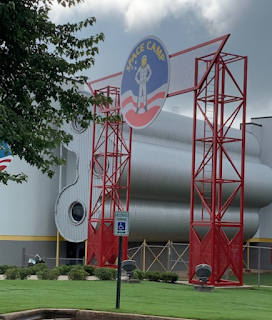 I want to share this op-ed of mine published in the Huntsville Times in Alabama for two reasons. Of course, I'd like everyone to rally around the cause of ending AIDS within a generation. But on top of that, I wanted to share that this piece of media was submitted to a paper in a town where I don't live and was picked up and published right away. I was gazing out my hotel window overlooking Space Camp at the US Space and Rocket Center, where my child was having a week of super-geeky summer camp and being just a tad jealous of her. Then, I thought about an op-ed I wrote during the week of the 50th anniversary of the Apollo moon walk that none of my local papers wanted to publish.
Encouragement from fellow RESULTS volunteer Willie Dickerson, media writer extraordinaire, over the years has helped me shed my reservations about submitting writing to newspapers in communities far from home. I thought, "What if the folks here in "Rocket City, USA" would like to hear another spin on moon stuff that also reminded them that tourist parents visiting their fair city were spending money locally and thinking about their achievements?"
Well, it worked like a charm and I can offer you these tips of encouragement for fellow activists:
Enjoy the read! 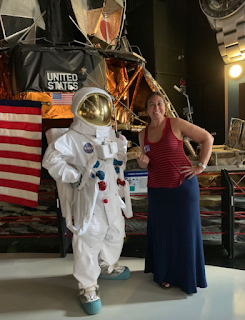 What will be our next moonshot?

As one of the out-of-town Space Camp parents who drop our kids off for days of fun and science, this year I decided to stay in Huntsville for the week.
Working at a hotel window that looked out on the towering Saturn V rocket, I thought about how the United States – embodied by President Kennedy – dared the world to think we could reach such a mind-boggling goal as a trip to the moon. Fifty years later, we are still wondering what our next moonshot will be. What will be the next scientific accomplishment to capture the imagination of the world as we wrestle dream into reality?
In many ways, the end of AIDS has the makings to be our generation’s moonshot achievement. Nations of the world have already come together in a bold commitment made without knowing precisely how it would be achieved. The path to ending AIDS emerged in 2001 when UN Secretary General Kofi Annan proposed the Global Fund to Fight AIDS, TB and Malaria as a mechanism to galvanize and distribute badly-needed resources for countries burdened by diseases of poverty.
Since then, the Global Fund achieved what was once considered impossible. Annual AIDS-related deaths and new infections have been cut in half. Of the 37.9 million people living with the human immunodeficiency virus (HIV) in 2017, the Global Fund-supported programs provided antiretroviral drugs (ARV’s) to 17.5 million of those cases, slowing the rampant growth of HIV that leads to AIDS and saving millions of lives.
But after more than 15 years of incredible progress, we have now entered a new phase in the struggle against AIDS. We know more than ever before about the spread of HIV. We have reliable drugs to prevent mother-to-child HIV transmission during pregnancy. We have strong partnerships between governments, the private sector, technical agencies, and people affected by diseases. In short, we now have the tools and it’s time to finish the fight.
The world is fast approaching another decision point about AIDS. This October, international representatives will gather in Lyon, France for the sixth Global Fund replenishment conference. Each country will stand up to make a three-year pledge to fund their share of the $14 billion needed to save 16 million lives by 2022 and put us on a the final leg of the journey to finally end this disease. Presidents George W. Bush and Barack Obama both made the U.S. a leader at every prior conference by providing one-third of the total funding. This sustained commitment inspired other countries to step up and provide the rest. Will President Trump do the same this fall? After all, he did declare a bold goal in this year’s State of the Union address to eliminate the H.I.V. epidemic in the United States and beyond.
Far-fetched goal? Check. Technological advances? Check. Call to action from the American President? Check. The only thing missing from the AIDS challenge to make it a moonshot is a groundswell of public support. And that is up to all of us.
Engaged citizens must light the fire of political will to tackle the problem with renewed fervor. For instance, we can add our voices to American activists currently urging President Trump and Congress to make good on president’s State of the Union goal. To follow through on such a lofty goal, the White House must pledge $4.68 billion from the U.S. over 3 years to the Global Fund and Congress must allocate those funds every year in our budgeting process. Congressmen Mo Brooks (AL-5) and Robert Aderholt (AL-4) and their colleagues in the House of Representatives have already proclaimed their support by calling for $1.56 billion for the Global Fund in their 2020 funding bill proposal along with specific language supporting one-third of the total worldwide funding. All of them can strengthen that position by co-sponsoring House Resolution 517, which details the accomplishments of the Global Fund and supports a robust pledge from the U.S. at the 6th replenishment conference.
As we nostalgically remember our grand achievement in space from 50 years ago, let us also take an active role in the marvels we can achieve on Earth together. With persistent public pressure reminding elected officials to take bold steps with the Global Fund, we can unite with the rest of the world to achieve what once was thought to be impossible: the end of AIDS.