Show of metaphorical cyberspace hands, please...how many of you have seen something you disagreed with on your Twitter or Facebook feeds since Election Day? How many of you have responded on your own feed or commented on someone else's just to have it blow up into a vitriolic back and forth that left you feeling much worse than if you'd never checked your social media at all? I think it's happened to most of us.

I find myself thinking about some of the rules of thumb I've created for myself in order to be the kind of person I want to be online. I'm sharing them with you, not to be preachy, but to remind myself to stick to my personal guidelines. Facebook comments are rarely a place where thoughtful exchange of ideas can change ideas that are fundamental to personal identities. Yet I hope my suggestions can help others navigate social media in a positive and constructive way.

#1 Write as if your kids were reading over your shoulder.
You know the old response to sexual harassers that goes, "What would your mother say if she knew you were saying that?" I think we moms should ask ourselves, "What would your children say if they knew what you wrote?" Set the same good example in your on-line life that you set for them in-person. Besides, I'm not convinced that everything we do online ever goes away. The kids will probably find it eventually.


#2 Remember there is a real person on the other end.
The Golden Rule? It's a good one. Paraphrased: "Treat others the way you want them to treat you." Would your comment make you feel horrible if it were directed at you? Is it more likely to turn people against your cause than bring people towards it? If you answer "yes" to either of those, you probably don't want to be hitting "send" on that nugget of hostility.

#3 Stop. Breathe. Reflect before you type another word.
Is your heart beating faster as if you've just been physically threatened? This happens to me, too. Especially if someone has just attacked one of my core beliefs as in..."Women should not be in Congress," or "You are an over-privileged soccer mom." (I'm an over-previleged FINE ARTS mom, thanks) That accelerated pulse means you're entering an emotional area of the brain where your logic and long-term thinking are suppressed. You should measure your next words very, very carefully. Take a walk and look at a tree. Eat a piece of chocolate to release some serotonin brain chemicals to make you feel happier. Enforce a cooling down period on your comment. OR, just leave it alone. (see next paragraph)


#4 Don't make blanket insults.
Refrain from saying things like, "People who think that are..." or "You're all a bunch of..." As we'll see in an example below, it's hard to back up from that to say "Oh, well, I didn't mean YOU specifically." Yeah, you did. You said it and we can all read it right in front of us.

#5 Consider removing yourself from the equation if that's more beneficial.
Sean Astin, a celebrity activist who actually spends a lot of time online talking to his followers about controversial subjects, had this to say to a crowd at a RESULTS conference about getting involved in an unhealthy back and forth in a comments section. You know, those times when you want to say something positive someone and the internet trolls swoop in to attack? "Just drop your happy bomb and move on." Astin is always up for a thoughtful exchange of ideas, but I notice he's not above blocking people who just attack repeatedly with nothing constructive to say. Ending your engagement in the conversation is an option you have online that you don't have in real life and it's okay to exercise that choice.

#6 Recognize the other person's feelings as valid
Are you still willing to be in the conversation and it seems the other person is really exchanging ideas instead of hurling insults? My favorite opening phrase when I'm trying to diffuse something online is, "I can tell that you are very passionate about this." It isn't mean. It doesn't give an inch of concession from my position. It states that I'm listening to them and I see what they are feeling without using the dangerous "I know how your feel" that leads to badness (What do you mean you know how I feel? You don't know how I feel! How dare you!!! etc, etc) A simple acknowledgement of emotion can be followed up with the next suggestion below...

#7 If possible, invite the other person to join you in making the world better!
This might be a radical thought, but if you can find any common ground at all, ask them to attend a meeting for a group you're involved in or to join an organization that supports your common ground. For instance, both Trump and Clinton supporters were interested in a fair election. Inviting the other person to be a legitimate election volunteer (not just a weird illegal lurker) might have been a place for common work. I often invite people to check out non-partisan groups I'm in that work on hunger or poverty. Even if someone doesn't believe in Food Stamp assistance, they might be willing to volunteer at a local food bank. Sometimes, I ask them to come to lobby with me or join RESULTS although no one online has ever taken me up on that yet. (Hope lives on!) It may not always be possible or appropriate due to geography or other circumstances, but I every time I do it, it diffuses the situation because the other person realizes one of three things:

Want to see it in practice? Yesterday, on a friend's Facebook page, I saw her advocating for asking the electoral college to reject President-Elect Trump. A woman (who posed with my friend in an "I Voted! Vote like a girl!" selfie less than a week ago) was pressing her about this position. The debate got rough with this friend stating an opposite view about the electoral college saying, "shame on anyone who would think otherwise". I jumped in to commend my friend's bravery in defending a position when a friend was calling her lazy and shameful. Of course, that person engaged with me. 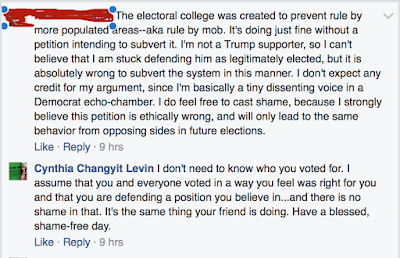 Okay, if I had to do that again, I would have edited out the "Have a blessed, shame-free day" line because it doesn't read off the screen well. In my defense, I'd just come from church and I really wanted her to feel free of the shame she was casting on others in addition to just stopping the casting. But I could have stopped my comment one sentence earlier and it would have been better. Luckily, she kept talking and it could lead to the place where I could employ suggestions #6 and #7. 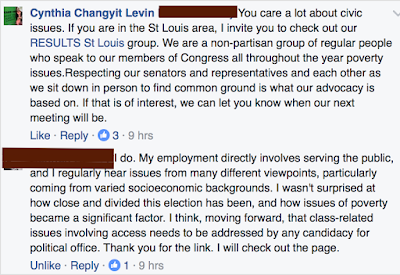 Her willingness to check out the weblink for RESULTS is about the best thing I could hope for, so I ended my involvement right there. If you can come to an understanding, everyone feels heard, and people walk away thinking there could be a possibility of working together...that is a best case scenario. It won't always work that way, so don't forget about option #5 about removing yourself from the troll equation, but why not hope for the best?

Remember, we have a wide array of emoticons these days. Let's try to use more than just the sad and angry ones!

How have you been dealing with
social media dissent in your circles?