My Letter to Santa This Year 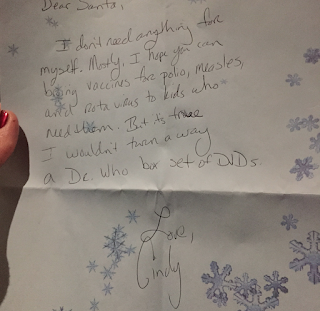 My kids and I wrote letters to Santa this month. I know that seems like an odd activity for a household raising Jewish kids, but it was part of Macy's "Believe" campaign for the Make a Wish Foundation. For every letter to Santa that Macy's received, they donated a dollar to Make a Wish. They are still accepting letters online through Christmas Eve, so if you would like to participate, please do!

However, it got my older daughter and I thinking and we thought we could share the love even further. We wrote this letter to the editor together today and she is submitting it. Who can say whether it will actually be published, but I wanted to share it with all of you in case you'd like to use the idea with your own newspaper this week!

know you have a lot of toys and video games, but do you have any vaccines for polio and measles? Because so many kids need them. Only 1 in 5 children in the world get the immunizations they need for preventable diseases. Over 1.6 million kids will die before they are 5 years old from treatable and preventable illnesses. I work on these issues all year, asking Congresswoman Ann Wagner and Senators Blunt and McCaskill to sign onto legislation like the Reach Every Mother and Child Act (H.R. 3706 and S. 1911) and other bills that help babies and kids around the world, but I think they need a little help. You’re kind of an expert on overnight miracles, right? Could you deliver some of those medicines in your sleigh, too? That way we could skip all the hard work of distribution through the "cold chain," trying to keep the vaccines cold while delivering them on trucks and bicycles. Plus, you could give the day off to all the doctors and volunteers who give the vaccines!

No matter what religion you observe, I hope you consider writing your own letter to Santa, either to your newspaper or to Macy's, to help us spread the love for all children throughout the world.

P.S. Santa also reads my blog or his mail from Macy's! I did get that Dr. Who box set. I assume that children are also getting vaccines from him as well :)

Tax Day is like #Christmas when #WorkingTaxCredits Help People in Poverty 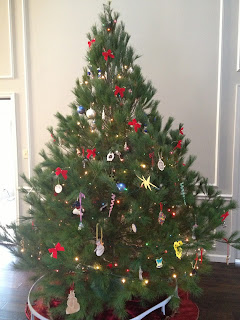 Today is a big day in Congress for working families in poverty! Congressional leaders in the House of Representatives voted on a major tax package that could prevent 16 million people from falling into or deeper into poverty. U.S. Representatives voted on making permanent the expiring provisions of the Earned Income Tax Credit (EITC) and the Child Tax Credit (CTC). YOU can help by calling your senators to ask them to support it as well!

I'll be honest. When I first heard about the Earned Income Tax Credit, I wasn't too inspired to take action on it even though it was supported by a couple of my favorite anti-poverty advocacy groups, Bread for the World and RESULTS. I didn't rally behind it right away because I didn't know what it really meant to an individual. Even though I believed in the theory, I didn't really understand what a tax credit could mean for a family on the edge until I met Maxine Thomas at a RESULTS regional conference.

Maxine lives in Indianapolis where she is a volunteer with RESULTS. She's a mother of five who works full time. She's also a member of the RESULTS “Experts on Poverty” program, a group of volunteers who speak with legislators about their firsthand experiences with poverty. She talked to us about what a little extra money at tax time means to her children. I heard her story verbally, but this is an excerpt from her comments from an article in The Hill.

"Just as I excitedly await the holiday season, there is another time of year that I look forward to: tax time. Tax season has become like another celebration for my family because of the Earned Income Tax Credit (EITC) and Child Tax Credit (CTC).

I work full time, but I still find myself in the rut of not being able to afford the costs of everyday life. As the saying goes, I have to rob Peter to pay Paul. It is my reality. How do I decide which bill to prioritize when they are all important? A roof over our heads, electricity, heat, and water — these are all essential.
Throughout the year, I’ve learned to make payment arrangements to prevent my utilities from being disconnected. I've learned how to stretch a dollar bill by counting out 100 pennies so that I never forget the importance of every single cent. It’s not easy, but the EITC and CTC provide us with the crucial support we need to get by. Every penny counts.

Every year at tax time, my husband and I can catch up on paying bills and feel free from those worries when we take our kids to the mall and let them choose a new pair of shoes. I’m able to breathe a deep sigh of relief knowing that I can finally replace worn-out clothing and make sure they have what they need. There is nothing quite like watching the joy on my kids’ faces as they run and play in a new pair of shoes they were able to pick out themselves. It’s a wonderful feeling for all of us."
I thought about my own daughter who asked for a pair of boots for her birthday. I waffled, thinking that she wanted some pair of fashion boots she might have seen on a friend at school, but she led me to the shoe department at Target and showed me a pair of very practical brown boots. The desires of Maxine's kids are not any different than my girl's. Our kids are not fancy or spoiled. They just want shoes that fit and that they can pick out all by themselves. A simple pair of shoes gives kids a sense of self-worth and pride. For moms like Maxine, the tax credits are the thing that makes it possible to provide this basic thing for children.

The EITC is a refundable federal income tax credit for low-income working individuals and families. The EITC is designed to "make work pay" by supplementing low-wage work with additional income. The intention is to move a family with a full-time, low-income working wage to living above the poverty line. The goal is to benefit both the worker and any children and dependents that may rely on their limited income. For critics who complain about "poor people" being lazy, this anti-poverty tool is perfect because it rewards people who work! According to 2014 U.S. Census Bureau data, the Earned Income Tax Credit and the Child Tax Credit lifted 9.8 million Americans out of poverty.

These tax credits help so many people make ends meet, but important improvements are due to expire in 2017. If Congress does nothing, 50 million people will lose part or all of their tax credits. About 16 million people, including 8 million children, will fall into poverty or deeper into poverty. If Congress does not act to make these provisions permanent, it will have an impact on families like Maxine's.

Don't let your senators give up this chance to make current EITC and CTC benefits permanent. Key negotiations are taking place today and ALL members of Congress, regardless of their party, need to hear this message! Take a moment to reach out to your senators using this link from Bread for the World. Urge Congress to make the expiring EITC and CTC provisions permanent before leaving for Christmas so that kids in poverty might have their "Christmas" at tax time.