In advocacy as well as motherhood, sometimes things don't go according to plan.  When illness or unexpected surprises pop up, you just have to gather up your dignity and roll with it! 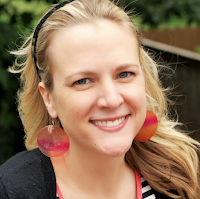 Andrea Riley is a Shot@Life Champion from Lincoln, Nebraska. As a dedicated activist for vaccines to prevent global child deaths, she knows the value of building great relationships with aides in district offices. For many of us, it can be common to drop by casually with a delivery or a message for a local staffer since local district offices can be a lot less formal than Washington D.C. But when Congressman Jeff Fortenberry unexpectedly dropped in on her 2016 meeting...well, read on with Andrea's story!

"As a mother you pick up so much from your kids; however, sometimes you just seem to pick up their germs more than anything. It was October, I was working and my 11-month-old daughter was in child care, and we had been catching every bug imaginable. I had made an appointment at my U.S. Representative's office to talk to them about keeping kids healthy worldwide through global vaccination, but had to cancel and reschedule twice due to illness - the irony was not lost on me. Fortunately, the germs we managed to catch were not life-threatening and we had great medical care. Others around the world are not so lucky, which is why I am a Shot@Life Champion and advocate for funds to provide life-saving vaccines for children in developing countries where they are most needed.

"I had rescheduled my appointment with an aide at the local office of my Representative for a Friday afternoon.  It was casual Friday where I worked - which was only a block from my Representative's office - and I still wasn't feeling great, so I went to work and the meeting in my casual clothes and a Shot@Life lapel pin. I had a friend join me and luckily she was dressed like a professional. I just didn't have enough energy that day to look fancy. I'd met with this aide before and didn't think she would mind. I really wanted the meeting before World Polio Day (held every year at the end of October), so it would have to do. We walked over to the office and checked in.  As we were waiting for the aide, much to my surprise and horror, our Congressman walks in. Here I am wearing what I call my "Husker pajamas" and I see, for the first time, my member of Congress in the flesh. We had no idea he was even in town!  He sees me and my friend and was immediately embarrassed.

"Yes, you read that right, he was embarrassed. The first thing he said was, 'If I would have known I'd be seeing constituents I'd be wearing better shoes! I'm so sorry, I'm caught off-guard and I've got my old shoes on!' I didn't find his shoes to be bad at all! I just couldn't believe that he was embarrassed for being underdressed when I was the one who was mortified! I was relieved he didn't seem to notice my completely unprofessional attire and took the opportunity to tell him briefly about what I was there for and then I asked him for a picture. He politely agreed, but instructed his aide to take it horizontally because he didn't want his shoes in the shot.  :)"

Andrea knew that this experience was just one of many she would continue to have with this particular office. Of course, we always want to make a good impression, but a chance encounter like this can help to remind everyone how human we are whether we hold an elected position or not. If find yourself in an odd situation, just hold your head up high and speak out for the people you represent!