The Strong Women of Jeju Island 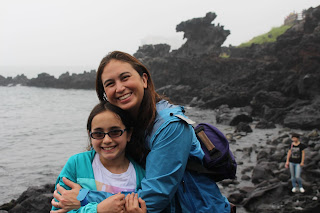 This summer, I travelled to South Korea with my daughter. Our guide (and Taekwondo instructor!) had the clever foresight to make Jeju Island our first stop. Located 130 km from South Korea's southern coast, the island is the country's largest island, smallest province and one of the New Seven Wonders of the World. It's perfect for relaxing when you need to readjust your internal clock. We were a few of the 9,000,000 tourists per year who visit this beautiful volcanic island. Geology aside, I found another aspect of the island's reputation to be particularly fascinating. You see, Jeju Island is known for the strength of it's women...leading to the nickname: "The Women's Island."

Wow! Who knew a place like that would exist in a country that struggles in regard to the status of women (particularly in business and politics)? Yet here is a pocket within Korean culture where the strength of women has openly celebrated for generations. On Jeju, women have long been a majority population and held economic power. An article from JejuWeekly.com explains:


"Historically, Jeju has been known as an “island of women” as females outnumbered males, worked alongside men in both agrarian and marine labor, and typically had economic control in their families. Under the rule of the Joseon Dynasty, which exalted Confucianism and firmly elevated men over women, the birth of a daughter was nevertheless a happy occasion in Jeju's coastal villages as she could become a “haenyeo” (diving woman) and thus earn money for her family."

Diving women? Yeah! For centuries, women on Jeju Island called "Haenyeo" have supported their families by harvesting conch, abalone, octopus, and other creatures by hand from the ocean floor. They are a symbol of female independence and strength.

Even today, you can see them diving using no breathing equipment even though they are down for around two minutes as deep as 10 meters underwater.  They dive with masks and lead weights (to make them sink faster) and a round flotation device to hold a net for the harvest.

It's dangerous work. Between 2009-2014, 40 diving women died. According to the New York Times, the number of these "sea amazons" has dwindled to about 4500 from 26,000 in the 1960's with 84% of them 60 year old or older. Nowadays, younger women on Jeju Island prefer to work in hotels or rental car agencies for the tourism industry, but that wasn't available to their grandmothers. Diving offered the women respect and economic freedom to decide where family income was spent. Talk about a working mom!
At first glance, the independence of the Jeju women sounded great to me, but further research revealed that things weren't quite so rosy. There is a local saying - "Better to be born a cow than a woman" - that speaks to the rough and physically grueling life they lived. Even if a woman was out of the water, she still couldn't escape the same job held by millions upon millions of girls and women since the beginning of time...hauling drinking water.

Before running water was available, islanders obtained drinking water from rain or coastal springs. Women carried water on their backs using earthenware jars strapped in bamboo baskets. Until the 1960's, water in mid-mountain villages (where the water supply was scarce) was collected by girdling a large tree with a belt fashioned of grass, which led the water flowing down the trunk into a jar.

This image is so important to the culture that stone statues around the island recall the strength of the women who carried the life-sustaining water on their backs for years. My daughter got to try carrying one of the traditional jars herself. She says the jug itself was pretty heavy even when it was completely empty...and she is a strong Taekwondo black belt herself!

I'm glad I got a chance to learn about the Jeju women alongside my girl. It helped give us a historical perspective of women in a small community within a country we hadn't visited before.

Gender equality is #5 on the list of the Global Goals for Sustainable Development. We simply cannot end poverty without it. Because the basis of so many economies lies on the backs of so impoverished women, we owe it to ourselves to learn about gender roles around the world and support organizations and policies that help women lift themselves and their families up on a path to independence and respect.


Here are just a few ways to be part of the solution: