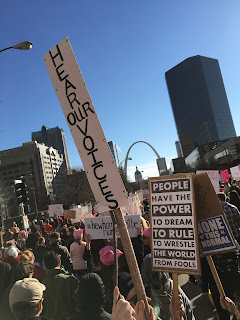 There is a simple and catchy chant haunting my waking thoughts. I heard it echo down Market Street and into Luther Ely Smith Square on the voices of thousands the day after Inauguration Day. One female voice would begin to shout, then women and men alike picked up the call and response chant over and over: “This is what democracy looks like!” 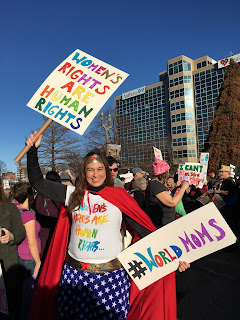 The Women’s March in Washington D.C., here in St. Louis, and in every major American city had the remarkable effect of propelling millions of women out from behind computer screens in their homes and into the streets to look each other in the eyes with common cause. Marchers, media, and members of Congress are now all asking the same questions: “What comes next? What will democracy look like for this group moving forward?”

As Former-President Obama urged in his Farewell Address, “If something needs fixing, lace up your shoes and do some organizing.” In order for a new women’s movement to gain traction and start changing the world, the next step participants will have to take is to march back to their computers armed with newfound inspiration and local networks. Now is the time to do the next scary thing and learn new skills that lie firmly outside of most personal comfort zones. Now is the time to learn how to effectively advocate for all the things worth shouting about.

Truly effective advocacy work is hard and unglamorous. It requires making commitments and carving out time from already busy schedules. It means joining groups with people who probably don’t feel exactly the way you do about all things in life. Listening to them, learning from them, and making compromises is necessary to form strong and lasting teams. Organizing with respect and persistence is difficult, but ultimately so much more effective and satisfying than shouting into a cyber abyss alone. New organizers and advocates will need to remember the exhilaration from the march to sustain energy in the rigorous work of organizing and taking actions.

My own dream is for us – no matter where we stand politically – to capture the energy of this moment and transform it into actions that defend human rights and empower women to break the cycle of poverty for themselves and for their children. If we can launch an unprecedented movement of citizen advocacy and hard work to change policies, then it will be a true success for years to come.

My advice to activists is this: Keep in touch with your social media connections and commit to working together in real life. Find people working on the same issues that you are passionate about. Meet face-to-face with each other and connect with a reputable advocacy group to teach you the skills you need. Support each other to overcome inhibitions and get up to speed quickly, so you can train others on how to call Congress and write letters. Learn how to write letters to the editor. And then, finally, take that leap to sit down face to face with your members of Congress and their aides. Unlock your power as a citizen and inspire Congress to work together to change the world. Because this is what democracy looks like.