The Luxury of Forgetting 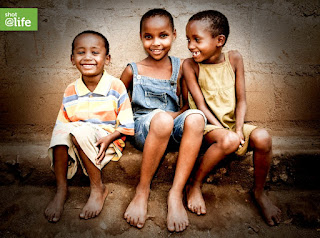 I have a confession. I’m a loving mother of two, but I can’t remember a lot about my kids’ first words except for which words they were. I’m also fuzzy about their first smiles. Who where they smiling at? What was so funny? Basically, I am a non-scrapbooking mom so busy keeping up with the current firsts – first T-ball hit, first choir concert – that I sometimes have trouble remembering the precious baby moments that had me squealing joyously eight years ago. It’s not something to be proud of, for sure. Yet in an odd way, I wish every parent had this luxury of forgetting…because in the developing world, the reality is much different.


Not Everyone Takes Milestones for Granted
A mother in Sierra Leone – a country with one of the highest infant/maternal mortality death rates in the world – can’t take for granted that her child will reach the age of five. The appearance of a first tooth could be the last milestone they experience together before a fatal illness ends their chances for more firsts. Those early baby moments will be the only memories she has of her child because the infant never had a shot at a healthy life. One in ﬁve children in the world lack access to the life-saving immunizations that keep children healthy. In fact, approximately 1.7 million children in developing countries die each year of a preventable disease like pneumonia, diarrhea, measles and polio. Put another way, one child dies every 20 seconds from a disease that could have been prevented by a vaccine. Coordinated worldwide vaccination efforts have made signiﬁcant progress, particularly in reducing cases of measles and polio. In 2011, the Measles Initiative announced it had vaccinated one billion children, decreasing measles deaths by 78 percent. Thanks to polio vaccination, ﬁve million people who would otherwise be paralyzed are walking and polio cases are down 99 percent. However, polio has recently reemerged in areas that had been polio-free for years and measles outbreaks are starting to crop up again even in the U.S. Until permanently eradicated, polio and measles anywhere remain a real threat to children everywhere.


The Cost of Forgetfulness
So, why haven’t we rid the world of polio yet? Why does measles still kill an estimated 450 people each day? I believe it’s because wealthy nations of the world have had the luxury of forgetting what these diseases are like. We’ve forgotten how deadly even diarrhea and pneumonia are if children don’t even have clean water to hydrate them. For a generation, Americans generally have had no eyewitness experience with the horrors of diseases, which plagued our grandparent’s time. As a nurse, my mother cared for patients who suffered from polio as a child, but even she can’t recall when the terror was commonplace. I grew up with only a cartoon image of measles represented by red spots, so different from the real deadly disease.

The Opportunity to Remember

This kind of forgetfulness puts lives in danger. It makes dying children an abstract concept. It eats away at our empathy. If we – and our nation’s leaders – had personal experience of the horrors these diseases bring, I think global immunizations would jump to the top of our funding priorities. Yet is it possible to understand without firsthand experience? Can we open our eyes to the fact that holding a dying baby is both brutal and common in countries where parents have no choice and no access to vaccines? Yes. And the most important fact to remember is that, working together, we have an opportunity to save a child’s life every 20 seconds.

For this World Immunization Week (April 21-28, 2012), please take these three short actions with me: