Give a Breakfast and Help Make "No Kid Hungry" a Reality

What did you eat for breakfast this morning? A bagel? Cereal? Did you go all out and make pancakes, eggs, or even (drool) bacon?

Oh, now don't feel sorry for me. I'm just a busy mom and a morning runner with a lot of lame excuses why I don't eat the most important meal of the day. I can get away with it because I'm a healthy well-fed individual throughout the rest of the day. As a middle class mom with a full pantry, I do make sure that my kids never, ever leave the house without full bellies and packed lunches.

But there are a lot of children in our country who share my non-breakfast tradition by no choice of their own. They don't eat breakfast because there's no food to eat. Subsidized school lunch is the only sure meal they can count on. Sixteen million kids - that's 1 in 5 - in the U.S. struggle with hunger. Sixty-two percent of America's teachers see kids who come to school hungry because they don't get enough to eat.

Take a look at this moving interview with Principle Sean McElhaney about the effects of hunger on his students. It helped me understand how the need to feed children in the morning goes so far beyond their comfort and physical development. It affects their performance on tests, attitude toward learning, and their entire outlook on life.

It's a daily downward spiral for a child to start the day at a low point and just go down from there. Chronic hunger has long-lasting negative effects. A child who doesn't eat enough isn't going to do well in school...and is likely to get sick more often...and will be less likely to graduate and go on to college, which will have a negative impact for an economic future...and if that happens, that child is much less likely to be able to earn enough to feed a family as a parent.

But, together, we can interrupt this cycle. Share Our Strength is an organization that works to ensure that every child in America has access to nutritious food where she or he lives, learns, and plays.

Please consider making a donation to Share Our Strength worth 10 or more breakfasts. For only $1, Share Our Strength can connect a child for 10 breakfasts. For $18 (a life-giving number for those of the Jewish faith, incidentally), that means 180 breakfasts! Imagine that. For less than twenty bucks, you can protect a child for over a whole semester from hunger pangs in the mornings. You can give a student a semester of better grades and higher self-esteem. 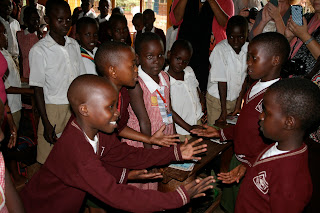 "My friends, do you know about the four F's?" That was the opening line of a performance by four boys at a Ugandan school in the midst of the slums of Kampala. These were among the first words I ever heard African children say. One of the young men you see in the picture had eagerly volunteered and suggested he wanted to preform their "dialogue" for their American visitors. The rest of the script went something like this:

Here is a video of group of kids doing a recitation of the Four F's. You can hear my uncertain, nervous laughter at the end of the skit when they ask how the Four F's affect their lives and a child collapses to the ground. We weren't sure if the skit was done or not. It was unlike any school performance we'd ever seen to have it end with a child falling down to indicate death. But, ultimately, I love it. This is the intersection of global health and global education. (Wait a few seconds for them to speak in unison and the sound will be clearer)


The Four F's are an easy way that children (and adults!) can remember the most common ways that diseases - like pneumonia - are transmitted. Food that is cooked on dirty cookstoves and cookpots, flies that bite many hosts, feces holding germs that cling to unwashed hands, and fingers that touch eyes and mouths and noses and friends...these can all be deadly in communities of extreme poverty. I heard this theme over and over again as we toured classrooms and heard songs about good sanitation practices.

The songs are very fun and cute - some might even think them quaint - but they aren't just schoolyard games. The Four F's are talked about by fancy grown ups like pathology experts at universities and global health organizations. This is serious stuff. I saw another skit with a girl in the role of a mother with a cook pot being admonished for not cleaning because unclean food can carry disease, make her children sick, and maybe even cause them to die. You see children coming to their mother hungry. As she prepares to cook from a dirty pot, three others appear to tell her that she has not cleaned it properly or washed her hands while the hungry children literally bend their ears to listen in.

Who else talks about sanitation and pneumonia? How about U.S. Secretary of State Hilary Clinton and internationally-known actress Julia Roberts (a.k.a the Global Ambassador for the Alliance for Clean Cookstoves) on Huffington Post? Ms. Roberts said on World Pneumonia Day 2011, "Of the 2 million people killed each year from diseases caused by toxic smoke from dirty stoves and open cooking fires, about half are young children who die from acute lower respiratory infections, most commonly pneumonia." One year later, this is still of critical importance as pneumonia is the top killer disease of children under 5 years of age in Uganda and in the world.

If you're like me - loving numbers, but not loving to read long paragraphs full of numbers - this infographic on pneumonia is my World Pneumonia Day gift to you. 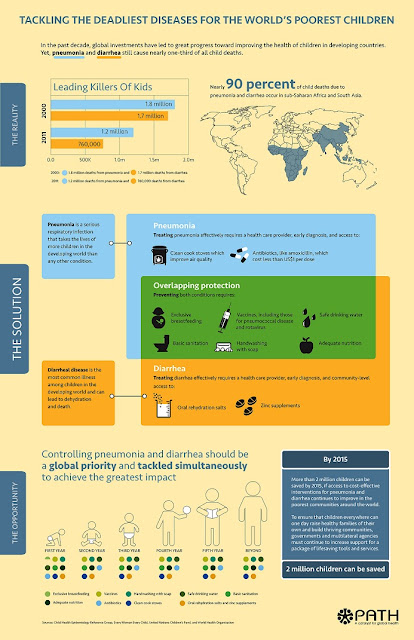 I found it posted on the ACTION blog...where not-so-coincidentally you can find an ACTION blog from me about vaccinations in Uganda reaching hard-to-reach kids and the need for the pneumococcal virus vaccine there.

So, now, my friends, you know about the four F's, too! I leave you with the cast of the cookpot skit mugging for the camera as all good primary school thespians do. 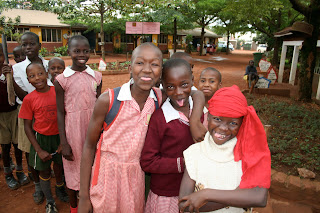