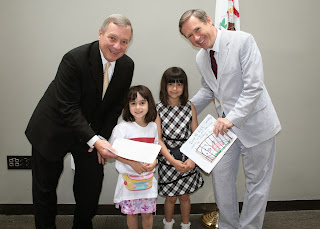 In recognition of World Polio Day, it seems fitting that as a mommy-advocate, I give space to a very special guest blogger. Yara Levin has raised over $2000 by running a 5K race for Shot@Life to help children who need immunizations against polio, measles, rotovirus, and pneumococcal virus. She is also a volunteer lobbyist with RESULTS and has spoken to U.S. representatives and senators in support of global vaccination programs. Is it a coincidence that her bi-partisan senators - Senators Dick Durbin and Mark Kirk - co-sponsored resolutions in 2012 and 2013 supporting the goals and ideals of World Polio Day and urging the international community to support health care workers risking their lives to provide polio vaccines? Perhaps not.

This year, she read "Small Steps: The Year I Got Polio" by Peg Kehret. She was so taken with the book that she wrote a summary of the book for me, which I share with you below. She also wrote an email to the author to share how much she liked it and what she has personally done to eradicate polio so no one would have to go through what the author did. I'm happy to say that Ms. Kehret replied within a few hours with kind words of encouragement for our young activist.

If you are inspired by Yara's advocacy or the book "Small Steps," visit the Shot@Life webpage where you can make a donation or take an advocacy action to help end polio. Polio has been eradicated in 99% of the world and we are closer than ever to creating a polio free world. We must take action now before we lose this opportunity. Gaps in funding have forced our implementing partners to scale back their polio vaccination efforts creating vulnerable populations worldwide. If we do not stop this disease now, it is estimated an additional 200,000 children a year will become paralyzed. With your help, we can make polio history!

A Summary of "Small Steps: The Year I Got Polio" by Peg Kehret
Yara, 4th grade

Peg is a normal 12-year-old girl until she gets polio. She doesn’t know how she got it, but she knows it isn’t good. She learns she is paralyzed fro the neck down and learns she has three kinds of polio: spinal, respiratory, and bulbar! When she comes out of isolation, she meets Tommy, an 8-year-old boy. Tommy and Peg become friends. Peg’s favorite doctor is Doctor Bevis. He paints her toenails.


One day, Peg feels an itch on her leg. She knows that she is paralyzed, but she tries anyway. Suddenly, she feels her finger move! After that, she can move her hand and finally her arm! Then, Dr. Bevis tells her she will move to another hospital. The hospital she will move to is called Sheltering Arms.


So, Peg says goodbye to Tommy and goes to Sheltering Arms.She meets Renee and Alice and Shirley, who also have polio. They are all very good friends. The other girls live too far away to see their parents all the time. So, Peg’s parents bring things for the other girls. The girls stay up singing, eating snacks, or talking. Peg can use a wheelchair now.In the midst of all this, Peg turns 13! One night, as they were talking, Alice said she did not know what a hula was. Peg decided she was going to try to show Alice. She didn’t do a good job. She fell down and Shirley screamed for a nurse. After that, Renee explained what a hula was.


Then, the time came when Peg could use walking sticks. Her parents came to see her and a nurse told Peg that she could go home for good. Peg said goodbye to her new friends and went home.I really liked this story because it taught me a lot about what it was like to have polio. I am very glad I won’t!