What are you doing AFTER New Year's Eve?

Maybe it's much too early in the game

Oh, but I thought I'd ask you just the same

What are you doing New Year's?

I think I'm drawn to the song "What are you doing New Year's Eve?" because it captures a mood that is both melancholy and hopeful at the same time. I think that's a pretty human condition. To be hesitant, a little pessimistic, but still optimistic enough to know there could be a better outcome for us...and to actually take the leap and ask the question that might change things! The song is about romance, but I think those emotions apply to how a lot of people look at the world in general, too.

We want to better ourselves and have more in our lives. We see suffering and injustice and that makes us want the world to be better for others. We want the Earth itself to be healthier. But too often we listen to messages telling us we're too small to take on big problems. My 2019 wish for everyone is for all of us to put aside those misgivings and fan flames from those little sparks of hope that lead us to take leaps, ask questions, and jump into action. 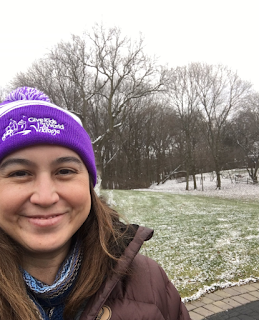 This week, I ran into a 22-year old recent grad who asked me about a hat for a charity that I was wearing. I told him the story about my involvement with the Every Ride Challenge to benefit Give Kids the World Village. He loved the story and expressed to me that he wished that he could do something to give back. He said he admired me because he just didn't know what to do or how to start. He's not alone. Not by a long shot. My advice to him wasn't very profound...it could probably be summed up with the Nike slogan "Just Do It." But I did offer him a tip to get started: Join up with a organization working to address the problem you want to fix.

It's pretty hard to take on the big problems in life like poverty or climate change by yourself, but the great news is that you don't have to. Thousands of organizations exist that you can join right now. Like, today! Plugging in with one of them automatically connects you to like-minded people who care about the same cause that you do.

Sam Daley-Harris, founder of RESULTS, wrote some encouraging words in an Orlando-Sentinel op-ed called "A New Year's resolution worth keeping: Join and organization, make a difference." He said:

"So here’s a radical idea. Embrace a huge goal that lights you up, perhaps a goal like this one: I’m going to join a group focused on enacting climate change solutions or a group that works to (you can fill in the blanks here) and I’m going to stay with it for a year, no matter what, but only with an organization that will take me seriously and help me experience some serious success. Then see what your life is like as a result. If you select something you truly care about and join an organization that really empowers its members (warning, those groups are hard to find, but I’ll list a few below), you’ll be surprised by your new sense of power." 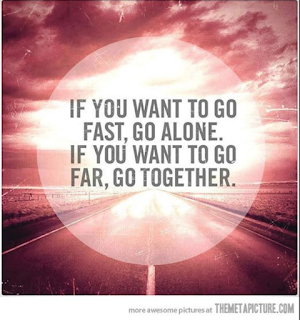 Far too often we make New Year's resolutions that we don't keep. Joining other people wanting to make the change that you also want to see in the world will greatly improve your chances of sticking with it. Which of reminds me of a great African proverb, "If you want to go fast, go alone. If you want to go far, go together."

In short, I encourage everyone to team up this year to make the world a better, more caring place. Whatever cause you want to take on, shed the excuses and jump in!