Can Fundraising Be Advocacy? Is fundraising advocacy? As both a fundraiser and an advocate, I'm here to tell you...no. Well, yes. Well, sometimes. It depends.

I'm often asked to help come up with ideas for kids' groups to help with poverty projects, which is great! I love it! If there's something to be known for, I want it to be that. Heaven knows, I'm never going to be known for any of my cookie decorating skills. But I digress. Generally, the first thing that comes to mind for a group of youngsters - or oldsters, for that matter - is fundraising. Somehow, fundraising - whether people actually like to do it or not - is what we've been trained from a young age to expect as the Helpful Thing To Do. Got an issue? Help by selling lemonade, doing a car wash, selling Rainbow Loom bracelets, etc.

There is nothing wrong with these ideas. But are they anything more than fundraisers? Are they awareness builders? Could be. Are they advocacy? Usually not.

In my mind, the litmus test for advocacy is determining whether you are engaging your guests/customers/audience to be involved with your issue moving forward. Are you inviting them to know enough about your issue to become influencers themselves and rally others to the cause?

Most of the time, it comes down to HOW you fundraise. What actions are you asking people to take? What is it you want them to do that will further your cause? If it's only to give money without education or further action, then this is not truly advocacy in my opinion.

I don't have anything against fundraisers. At the moment, I draw a salary from RESULTS Educational Fund as a fundraising coach for our volunteers, so I'll be the first to hop up on a soapbox and deliver an unsolicited diatribe about how fundraising is critical for any non-profit organization - advocacy groups included! However, I'm a volunteer and a busy mom, so I find I'd much rather take part in an activity that gets more bang for the buck than the actual bucks we collect. Anytime you can take a fundraiser and turn it into an opportunity for powerful advocacy...well, that's a recipe for higher impact for your cause AND a timesaver...so I'm all about that! Really, why stop at raising $250 to help build a school in Uganda when you might also influence a key Congressman to allocate $250 million to the Global Partnership for Education?

#1 Microfincance with Girl Scouts
A Daisy troop wanted to make a microcredit loan through Kiva. We read the children's book "One Hen" by Katie Smith Milway to explain microfinance and personalize the issue. The girls raised money simply by asking to do some special chores around the house for a few dollars a piece. Combined, that was enough to make a $25 microcredit loan to help change someone's life. They chose their microcredit recipient on the Kiva website. Then, to add that special twist of advocacy, the kids made a poster for their Congresswoman about microfinance to be delivered by one of the girls. Parents who attended the meeting wrote letters to Congress to help support microfinance programs. 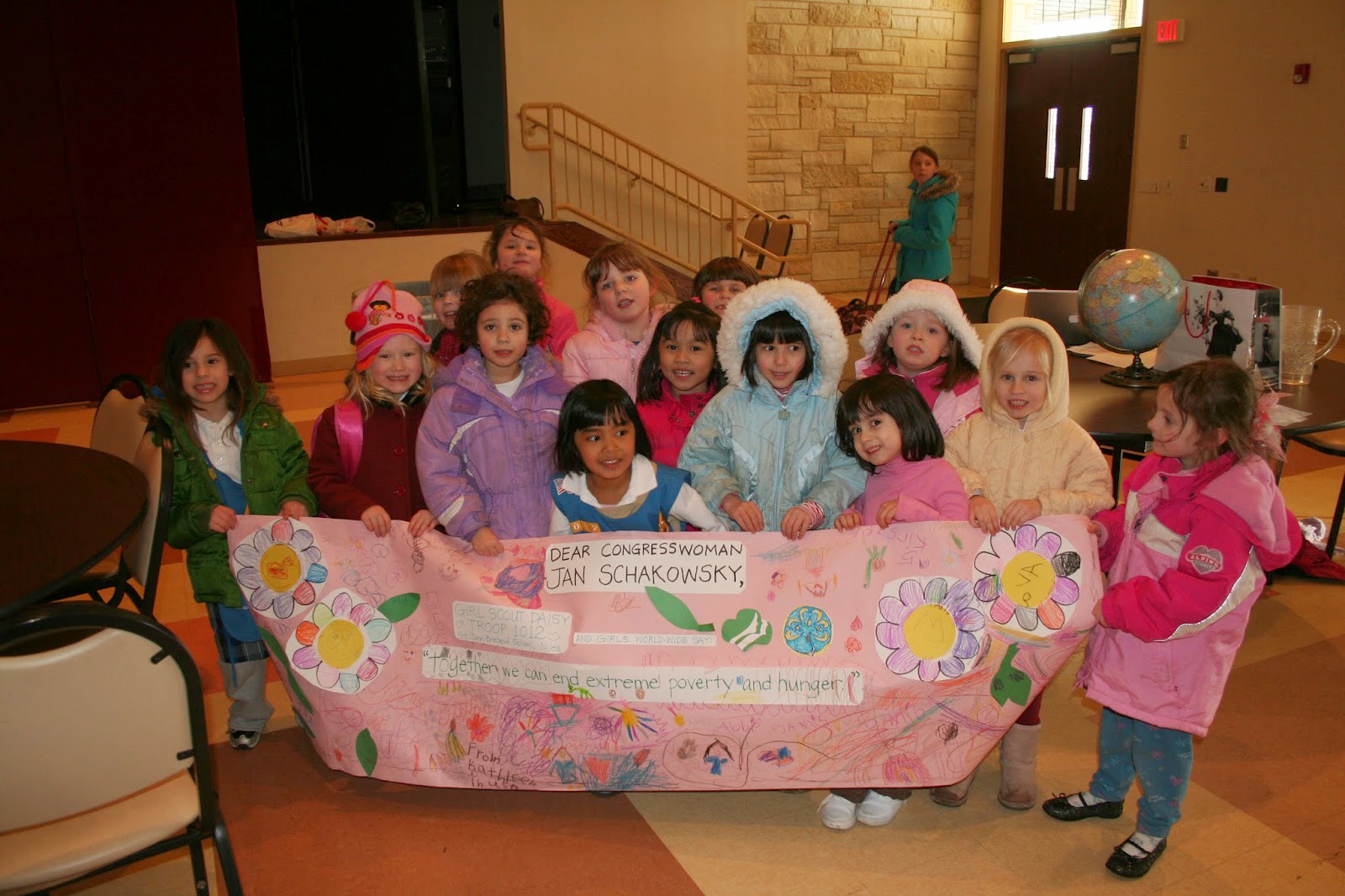 #2 Hunger with United Methodist Church of Evanston
My church in Evanston, IL is a Bread for the World Convenant church. To uphold our commitment, we annually donate money and hold an Offering of Letters, a Sunday where congregants write to Congress about hunger. We decided to combine fundraising with letter-writing. After worship (at which our pastor educated the congregation with a passionate sermon about hunger), we gathered everyone in the Great Hall where tables with letter-writing supplies awaited. We set up a table full of baked goodies with a sign indicating they could pay whatever they wished to donate to Bread for the World. With the letter-writing activity happening right before their eyes, they could see exactly what kind of activities their donations would support. One year, we even raised money for a volunteer to go to Washington D.C. to the Bread for the World conference with him right there talking to people about it. A seamless combination of fundraising, awareness, and advocacy! 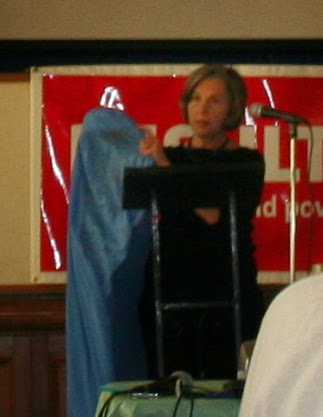 #3 Global Health with U.S. Representative Jan Schakowksy
My RESULTS advocacy group wanted to throw a fundraising event, but at the time we had a tiny list of volunteers and a small list of supporters. We wanted our event to not only generate funds, but also to be an outreach and public awareness event to tell everyone who we were and what we do. Since our Congresswoman, U.S. Representative Jan Schakowksy, was very supportive of our issues, we asked her to be our speaker. With her as a featured guest, we drew a large crowd of around 100 people who heard the Congresswoman talk about the need for the U.S. to support global health and also other foreign aid as a means of supporting women globally. At the point in the speech when she pulled out a burka to help us understand the culture of many of the women we seek to help, we knew she was advocating to us as much as we were to her. The audience got to see citizen advocacy in action when we turned to the Congresswoman and asked her point-blank to sign onto a piece of global health legislation. Happily, she agreed!

Can Sean Astin Get RESULTS? Yep. 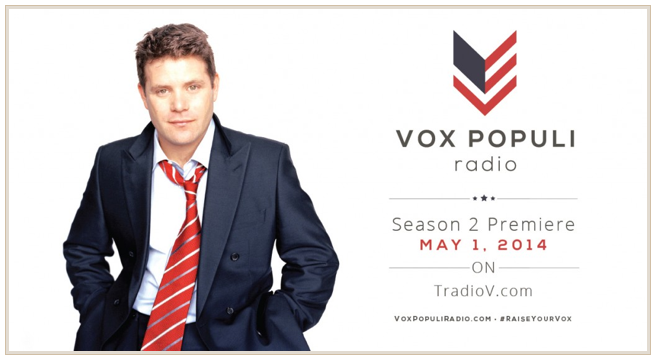 When will a political talk show do more than turn us against each other and, instead, start constructively turning words into action? The answer is...Thursday, May 1 at 3PM EST/2PM CST/12PM PST when the Season Two premiere of Sean Astin's show, Vox Populi, dedicates the first hour of the show to exploring citizen engagement with RESULTS!

Astin calls his show"Vox Populi" and he's looking for an audience beyond the normal echo chambers listening to the common mud-slinging of American political media. For his first episode of his new season, he's partnering with RESULTS - a non-partisan, anti-poverty advocacy group with an organizational mission to create the public and political will to end poverty by empowering individuals to exercise their personal and political power for change. Ken Patterson, RESULTS Director of Global Grassroots Advocacy, will be on the show with volunteer advocates talking about their personal experiences moving from being politically occasionally interested citizens to powerful voices for positive change.

Let me tell you a little bit about Sean Astin. You can see the movies for which he is famous (Goonies, Rudy, Lord of the Rings trilogy) for yourself, so I won't go into that here except to say that his earnest sincerity that leaps off the screen is also readily apparent when you talk to him in person about something he's passionate about...and the thing I've been lucky to be chatting to him about lately is citizen engagement, something we both care deeply about. Astin is a parent of three daughters and is clearly very concerned about them as well as the issue of education. About citizenship, he believes that being a good citizen goes beyond simply voting and paying taxes, but also involves active conversation and participation in our democracy to help decide what happens to our tax money and our country.

At this point in his career, he wants to use his celebrity profile to create something different in modern American media. As a political talk show host, he's seeking to facilitate a safe place for everyday people to learn and talk about the hot topics of the day without being attacked. "There needs to be places in our public life where people can talk about things without being angry at each other," said Astin in a recent interview in the Huffington Post.

When meeting in Washington D.C. with RESULTS Executive Director Dr. Joanne Carter, he was exuberant and energetic about his project and brimming with curiosity about RESULTS' long experience with engaging both the public and members of Congress with civil discourse and action. His questions were rapid and intelligent as the vision for this upcoming show began to take shape.

Bringing this back to the parenting perspective for a moment, imagine if our children went after each other with the illogical, argumentative viciousness that we see displayed regularly in political talk shows on radio or TV. I would swoop in with corrective parenting action immediately! Yet it seems to me that many adults are taking cues from these shows in how they discuss politics in real life and I think Astin has noticed this trend as well.


"Most people who you ask -- most people in America I've come across -- what do you think about politics, they say they don't want to talk about it," Astin said in the same Huffpost interview. "As soon as they open their mouth, they're attacked by somebody."

We don't put up with our kids verbally attacking each other and we shouldn't be doing it ourselves. I feel like adults should live up to the same standards in dialogue we try to instill in pre-school students when they are sorting out their disagreements...state your issue clearly, listen to the other person, reach an agreement everyone can live with. Isn't it time we grown-ups fed ourselves a media diet of real people talking to each other respectfully? Does that not sound entertaining? Well, it's Sean Astin's job to make it entertaining. It's your job to call into the show and keep it respectful! If you tune in on Thursday, May 1 2PM-4PM CST, you'll also get the benefit of hearing about RESULTS, a great organization that can help you raise your own voice to make the world a better place for you and your children!

So, can Vox Populi get RESULTS? Yep. Astin will talk citizen engagement with this powerful advocacy organization. Can Sean Astin get the results he wants with his show...to move a body of followers "occasionally interested" in politics to be involved in their own democracy in a civil and respectful manner? Well, that - in part - depends on you! Tune in to TRadioV and tweet in questions with hashtag #raiseyourvox to help make his social experiment a success.

To stay on top of everything going on with Vox Populi: follow Sean on Twitter and at hashtag #raiseyourvox, like Vox on facebook, visit www.voxpopuliradio.com, and join in the broadcasts every Thursday from 2PM-4PM CST.

Full disclosure: I've been a RESULTS volunteer since 2008, I've served on the national board, and I currently work part-time on RESULTS fundraising staff...but this blog is not part of my job and opinions are entirely my own.