Something about me...I like pie and I like pie charts. I especially like pies that can easily be cut up to into mathematical representations (not the sloppy berry ones...nice firm custards, chocolates, and pumpkins).

I was on a webinar with Shot@Life champions and they had some great pie charts I want to share with everyone! Consider it a primer for federal budget season.

A common complaint heard from Main Street to Capitol Hill is, "We send too much money away to take care of poor people in other countries when we have Americans in need right here." If you ever hear this, ask the person how much they think the United States government spends on poverty-focused foreign aid. Even among people who care a lot (like the new Shot@Life champions participating on the webinar), the guesses are often that we send 3% or 5% or even 10% to fight poverty abroad. The reality is that number is less than 1%... approximately 0.07%.

Now, I could stop right there. But...pie charts!!!

In the first chart, we see the big hunks of pie. Social security and U.S. health programs are sizable chunks that actually DO help low-income Americans. On the right, though, check out the sliver labelled International Affairs at < 1%. That's where our global poverty programs are, but we're not even narrowing it down to my favorite global health stuff yet... 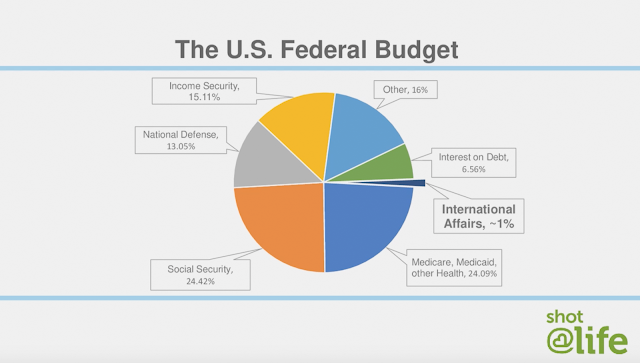 Okay, the second chart expands that sliver (I'm not sure why it's labelled 1.6% here, but it's still small, so go with it for now) and shows that only 18% of that tiny amount is used for global health initiatives. This is the part that protects mothers and babies in poverty from starving, fights infectious diseases to prevent an epidemic of drug-resistant tuberculosis (TB) showing up in the U.S., and a host of other vital programs. 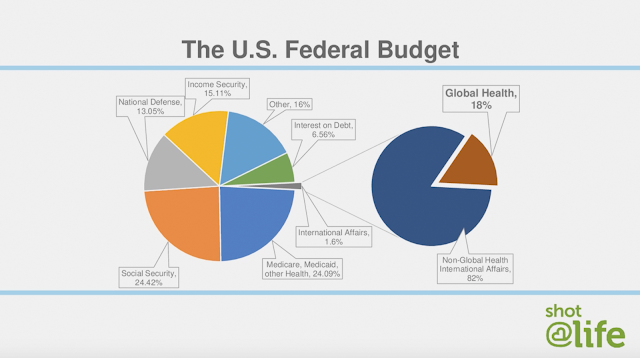 The last chart expands that little bit and shows how much goes to various diseases (like TB, AIDS, and malaria), nutrition, and other health-related programs. Even if I had a key lime pie to sit and dissect with you today, there's no way we could slice it that thinly to even show you!

Now, note that vaccines are less than 5% of that tiny slice! 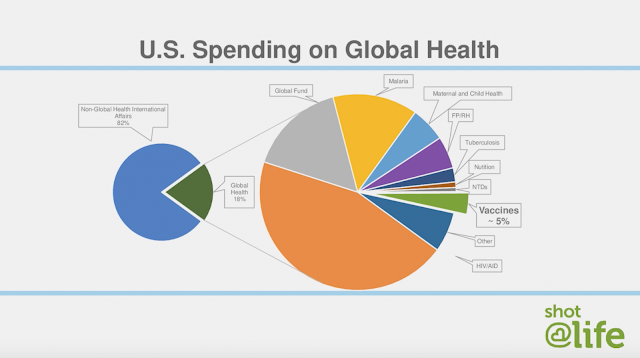 So, when I go with my fellow champions to Capitol Hill this month, we'll be advocating to defend that little green sliver of pie. In real dollars, that amounts to $290 million...which sounds like a lot taken out of context. But now, you're savvy enough to know that it's a very small portion of our budget that we can well afford in order to control diseases and save lives. Committing to keep up a pledge up of $290 million for four years would provide immunizations for 300 million additional children and save up to 8 million more lives. When you consider that 1.5 million children still die annually from vaccine preventable diseases each year, that sounds like a great investment!

If YOU would like to help protect life-saving vaccination programs, call your members of Congress today and ask them to support funding for Gavi, the Vaccine Alliance at the level of $290 Million in the fiscal year 2021 budget!
Posted by CCYL at 10:57 AM No comments: